Who hung this show? I forgot to ask during the opening last Saturday at Komaneka Gallery. What was extraordinary to me, and what begged the question about who hung this show, was the spontaneous emergence of a narrative, revealed in the sequence of images considered in turn while circulating clockwise (as one often does) around the gallery space.

Beginning with a full frontal floating self portrait (detail above) that almost knocks you backwards down the stairs as you enter the space, and returning to it again after a clockwise circuit, a story unfolds. The artist earnestly explains that he did not intend any sequential relationship of the works as they were hung. Yet a story tells itself, as if it had an independent will to make itself evident.

This was Budi Agung Kuswara’s first solo exhibition, at the fresh age of 26, and that’s quite extraordinary in itself. Having been asked to prepare a solo show, he took it upon himself to fly very solo indeed, relying on the self as the sole inspiration and subject for his works. Whereas in the past he had painted literal and outward looking works responding to political and news events, for this show since it would be entirely his own, he felt compelled to turn his critical eye inwards and paint a body of work from that point of view.

On self-examination, as he explains it, he encountered a lexicon of symbols and sufferings that simply found their own way to the canvas, in positions and juxtapositions that the artist himself cannot explain or rationalise. He repeatedly refers to painful memories that he cannot see or give voice to, consciously. The process of Jungian analysis comes to mind.

Walking the circle from self-portrait clockwise, the obvious impression is that this is a story awash in water. Water is everywhere, and the sound system in the gallery was set to emit water sounds, waves, rivers, leaking roofs, fountains. One recalls the Balinese term for their island’s syncretic form of Hinduism, “Agama Tirtha” or the religion of water. The artist is half Balinese.

As the story opens, bleeding wounds mar the pained face of the artist, wounds that recur, but seem to resolve as things progress around the circuit.

At first, there are trees, but they are artificial and weapon-like. The trees become arrows raining down on the artist in a desperate fetal position, and only burst into life if they break the artist’s skin, thus he is the sole medium of growth. He is a sacrifice here, a Fisher King in a rainstorm of tree-darts.

Again and again, there are swooshes of blood in the sky of these paintings, a motif borrowed from traditional Balinese painting, which signify the winds of change, conflict and spiritual energy. The bloody Nike swooshes are increasingly tamed as the story unfolds, and become composed accents rather than uncontrollable energies of the atmosphere.

Everywhere there is water in its many forms. Oceans, rains, swimming pools. Pink swim goggles (rose-coloured glasses) become emblematic during the central part of this voyage in pictures, during the swimming phase, and they are replaced by opaque black glasses at the end-beginning, in the floating, flat, perpendicular self-portrait with lilo, which is the anchor and kayonan of this eternally recurring epic.

At this point it must be noted that one of the first images in the cycle, where the artist’s wounds are most raw and fresh, like those of a beaten child on the day after, entering his classroom and responding to stares with stories of bumping into doorframes accidentally and such like – – in this image there is an expanse of sea, embellished by small tongues of flame spontaneously arising from the waters, and painted in the style of the Kamasan court painters of pre-tourism Bali. This mirrors the opening scenes of Hindu cosmogeny when flames first arose on the surface of the endless primordial sea signalling the Beginning. The artist has never studied the Vedas, and the classic Hindu cosmogeny myths do not figure in Balinese Hinduism. The flames here are close cousins of the wounds on the artist’s face.

The wounds seem to resolve of their own accord, as things progress, but remain in the picture, situated elsewhere, off the body, and work themselves out iconographically where red appears. Just as personal wounds might work themselves out in life, taking on more benign and even useful forms over time. Here, they become a shower cap protecting against the shame of a ruined coiffure, there an umbrella with its rib tips formed like drops of blood, (again, this object, the umbrella, is an instrument of protection from water) and yet again as swim goggle rims, protecting the eyes from water, and providing clearer vision into it. Yet in all these paintings the subject himself is in the water, artificually buoyed up, or swimming purposefully, or — in the umbrella image — taking shelter from water while immersed in the water itself (the work is entitled “Taking Cover while Soaking”).

The blood becomes contained, as the story unfolds, solidified into neutral inanimate objects, and eventually is worn and used in a state of relative ease (the primary and final self-portrait with lilo, in red swim trunks). Yet here again, with the swim trunks there is a role of protection given to the blood-red element in the picture (as the shower cap, goggles, umbrella). It is not protecting the artist from water, it is protecting him and us from embarassment, and protecting or enfolding the means of procreation, as well, a loincloth. Thoughts tend to drift in that direction at this particular moment when Indonesia is suffering the collective neurosis of the Anti Pornography Bill which was just signed into law. The status of bikinis and swim trunks, and of human anatomy now is in question, and in a state of confusion, in this tenuously united country, where one large population attires itself in little more than penis gourds (koteka) for both formal and informal occasions, and the climate calls for less clothing rather than more.

Trees take various forms in this story, and merit attention. They appear not only as arrows, but as balloons (which can fly and float to help keep one’s head above water, as does the yellow lilo in the iconic self-portrait that opens and closes the story and then opens it again). Trees become stiff cartoons against resort walls, then the cartoon trees appear again blown into life by the winds of the actual world that blow comic book pages into a confused funk.

Clearly this circular story is the circle of self-study, which never ends, but begins again at every moment of felt stability, with the sense of stability threatening stasis and so starting the cycle anew. The unexplained wounds heal from one chapter to the next, yet manifest again in other guises, as red umbrellas, swim trunks or varnished lips contorting like speaking stigmata.

This is a show that was well hung, one might say. The artist had no sequential notions in mind. The gallery owner and manager also had none. It seems to have happened of its own accord, as if the symbols communicated to the hanger exactly how to put the story in order. It’s as valid as the stories that occur to us and seem so supernaturally telling when we randomly array a handful of tarot cards on a table. Frankly, I am completely dumbfounded by this fascinating example of how the unacknowledged story is the most telling, and insists on telling itself, in symbols that arise and interact while we are all looking the other way. Art breaks the barrier between the active underworld of busy symbols and our everyday world, showing us the meat of the tale, the tale we are writing in everything we see, say, suspect, manipulate, and decide. 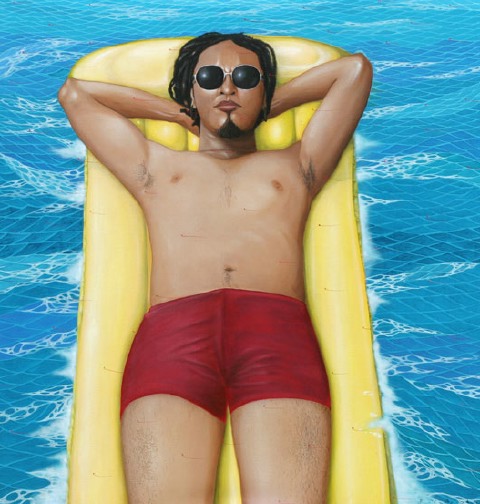 And so we come back to the central self portrait. Floating. In the sense already mentioned, we are beholding the artist as if from above, as if with the eye of God, or as one is said to see oneself as death takes hold, according to innumerable near-death experience reports. On the other hand this is an iconoclastic crucifixion image. In the gallery setting, the viewer is looking up at the body from a point of view somewhere in front of the feet, as one looks up at a crucifix in a cathedral. Yet this Christ is somehow slightly flippant about his predicament, he’s got those arms behind his head, not pinned down by spikes, but perhaps pinned down in some sense by the contents of that head.

Are we looking down as God does on a man supine, taking a rest break from the struggle of finding the self and validating it? Or are we standing on the floor of a gallery, looking up at an image of a man affixed to a vertical structure, a canvas or a cross, for example? Or a yellow lilo?

The floating self-portrait looks simple, almost silly, yet it is undeniably important, an icon, and a tortuously ambiguous one. Observe this, and pay attention to the details, or lack thereof. Finally the wounds are gone! The red is neutralised completely, contained within the boundaries of a comfortable pair of swim trunks, which provide practical use value and are largely benign. The subject, the artist himself, is in a state of comparative, perhaps momentary, calm. He is enjoying a moment of balance, floating on unthreatening waters, perhaps tenuously, on an inflatable mattress that could be punctured at any moment (perhaps by those tree-arrows). He is ok. But he is not entirely at peace.

The story is so obviously not finished. There is so much tension and impending crisis in the central self portrait, and the water (in flux and always insisting on change) is invading the lower right edge of the lilo The story is so obviously not finished and how could it be, for an artist of two cultures, with his publically acknowledged Pandora’s box of repressed memories driving the unending process of self-analysis in acrylic on canvas? This floating state is merely a moment of respite, and the subject/artist knows it. The face, half-hidden by the black glasses obscuring the blinding sun, shows a furrowed brow. There are many thoughts still unthought. The image seems to suggest that the battle may be over, but the war will never be. It’s about to erupt again, and there will be blood.

Budi Agung Kuswara, when I spoke with him about the show (above), explained that he himself did not know what any of the images meant. He did not know why certain symbols came to him and demanded to be made visible, and hadn’t expended undue efforts to try to interpret or modify symbols and images as they presented themselves to his imagination. I believe that he is telling the truth. It is self-evident. He has mustered the courage to appear in his blood-red shorts, baring all, but for the eyes behind the glasses (and goggles), and to make himself evident to us, without apology or excuse.

If this is what Budi Agung Kuswara is doing at 26, while others are tooling around destinationless on motorbikes, or emulating artists whose work sells well, or surrendering to the dictates of cinetron culture, fast money or escapism, then he is courageous to a degree that he evidently has no ability to understand. And that is the blessing and curse of being young and self-evident.